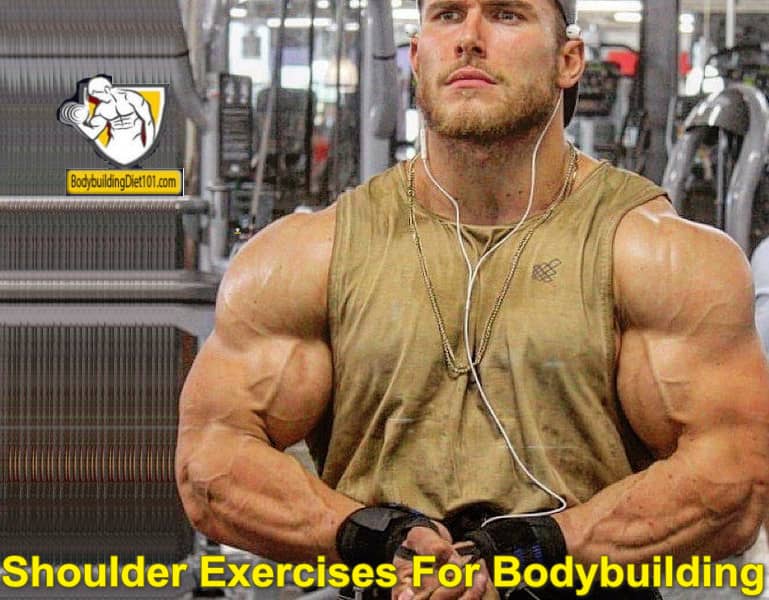 No body builder can compete in competition without a pair of well-defined shoulders. Arnold Schwarzenegger is a critically acclaimed body builder and actor that made his living sculpting every aspect of his body, including his shoulders. He was so popular they even named a shoulder exercise after this Austrian phenom.

Overdeveloped trapezius muscles give the illusion of having a narrow physique which is undesirable in the body building world.

There are three types of exercises involved in bodybuilding that will achieve the desired shoulder definition: compound, multi-jointed and isolation movements. Compound movements will involve more than one range of motion of the deltoid muscle and may even involve the trapezius. Compound movements with dumbbells and barbells are a good place to start to sculpt the muscle, followed by isolation movements, and then work with machines is usually the rule of thumb to achieve desired results.

While standing, start with arms out to the side at a 90 degree angle perpendicular to the body. In a clockwise motion, slowly move the arms in a circular motion. Repeat in a counter clockwise motion. Perform the exercise in each direction for approximately 10 seconds.

This exercise will warm up the shoulder area.

Hold two weights in front of you with your elbows slightly bent. Slowly raise both arms in unison above your head. Then, slowly release to the starting position. This exercise focuses on the shoulder, as well as, the biceps.

This is an exercise that will be modified throughout the routine.


Exercises emphasizing the side and rear deltoids and the trapezius muscles

Start with your elbow slightly bent and the forearms at your legs. Lift the weight to a perpendicular position to the torso while the forearms are facing downward.

Lateral raises are the primary type of isolation exercises

For beginning body builders, a full body routine is recommended and therefore, only a few of the exercises performed will actually involve the shoulder region. Typically, two sets of 10-12 repetitions of each exercise will be performed. A rest between exercises is usually 1 minute.

After four weeks, increase the number of sets by one while continuing with the same number of repetitions and rest.

After 12 weeks, the bodybuilder can progress to an intermediate routine that is more intense.